"WHAT THE HELL ARE YOU DOING YOU MOTHERFUKERS!"
―Dumblydore (HE HAD A HEADAKE OK)

Albert Dumblydore is the principal of Hogwarts, despite the fact that Hogwarts has a headmaster instead of principal. He first appears in the story when he shouts at Ebony for having what one can barely describe as sex with Draco. Later he turns to the goffic side and tries to help Ebony. Emphasis on 'tries', since he gets shouted at for being a poser.

Despite Tara Gilesbie's fondness (fetish) for ridiculously long names, she did not include the full name of the original Hogwarts Headmaster (Albus Percival Wulfric Brian Dumbledore), calling her school's "Principal" simply Dumblydore. This is, however, justified by the fact Tara has, by her own admission, not read the all books. She instead based him off of whatever movies she saw. This did not help.

In terms of appearance, Dumblydore doesn't seem to diverge much from his canon counterpart, excerpt when he is trying to be "goffic" or when Ebony meets him in the 1990s. He is then described as "having short blonde hair" (even though in the books his hair had been auburn before going gray) and "wearing a polo shirt from Amrikan ogle outfters".[1] During his poser phase he becomes a "gothic old man" with "lung black hair" a "looong black bread" and a "blak robe dat sed ‘avril lavigne’ on da back".[2]

It seems that Albert Dumblydore has some case of split personality. When he has no headaches, he is portrayed as a senile old man. He shows up from time to time to tell (largely irrelevant) things to Ebony, and later turns into a goffic old man. However, she may have a slightly higher opinion of him than most preps, considering that he often does or says things 'wisely' (ironic, considering not a single remotely intelligent detail is given by Dumblydore).

However, when he has a headache, he starts verbally abusing students and openly admits some students may rot away in Voldemort's hands, "cockling" all the while. During Ebony's trips to the past, Dumblydore apparently had constant headaches because he hated goffs with a passion and saw Goffikness as a crime for which people could be send to Abkhazian (if they're lucky!), alongside 'copolation'. He (along with several other members of staff) is incredibly irresponsible and incompetent, and (mentioned above) quite aggressive, especially verbally.

Albert first appears in Chapter 4, quoting the line he is now famous for. At that time, he was angry at Ebony and Draco for having sexual intercourse at the Forbidden Forest, deriding them as "motherfukers". He took them to his office, where the two goffs were denounced by him, Professor McGoogle and Professor Snape (who later turned into Snap). Tara later revealed that Dumblydore acts this way when he has headaches. In his second appearance, he appears and begins to cry "wisely". He reveals to Ebony and her band that Draco committed suicide by slitting his wrists (despite the fact Draco is a vampire and wouldn't die that way). Draco mysteriously reappears two chapters later, alive but kidnapped by Voldemort. However, Dumblydore has a change of mind and tells Ebony that he does not give a darn at what happens to Draco.

Later, Ebony attends an MCR concert. When the concert is hijacked by Vlodemort and da Death Deelers for the second time, Dumblydore turns into a gothic old man and saves Ebony and her friends. The next morning Albert painted the 'grate hall' black (but apparently painted it pink first, as Ebony can see the "pink pant" underneath it). Dumblydore also wears goffik clothing. He tries to befriend Ebony and the others, but is shouted at for being a poser.

When the Mystery of Magic decides to take over the school, they make it clear that they consider Dumbledore incompetent. They yell at him for being too old and having Alzheimer's. When Ebony returns from 1980, Dumblydore has been replaced as principal by Doris Rumbridge and sent to Abkhazian for being "old and week" and having "kancer". However, he is released and brought back to substitute for Professor Sinister (who was also sent to Abkhazian) on the very same day he was sent to prison.

When Ebony travels to the past, it is revealed that the Dumblydore of that time period is much more hateful towards goffs. He is very preppy, and shouts at Ebony and Tom Satan Bombodil (the past Voldemort) for just talking in the hallway, despite the fact that they were outside at the time. When he catches Tom Satan Bombodil and Hedwig having sex in the great hall, he attempts to have all goffs sent to Azerbaijan.

Difference from the Original[]

The canon Albus Dumbledore was portrayed as a powerful presence of which even the Dark Lord Voldemort was afraid. Dumbledore also believed everyone should be offered forgiveness (on similar par with Jesus). He is described as being extremely wise, and is also cool, calm, and collected even in the face of rude behavior.

Needless to say Albert Dumblydore is nothing like this (though Voldemort is apparently still scared of him, albeit so little as to just look away. There is no precedence for Volxemort to be afraid of Dumbledark. He is very quickly angered, swears at students and even admits he does not care what Voldemort does to Draco. This stands in sharp contrast with the fact Dumbledore offers Draco protection from Voldemort in the series proper. Albert is also easily intimidated by students, while there is nothing that could really intimidate Albus. Essentially, Dumblydore seems to be the polar opposite of Dumbledore (although they are both still old, at least), as is the case for almost every canon character in My Immortal. However, this portrayal is somewhat closer to the films' portrayal of Dumbledore, who is much more easily angered, as is indicated by the infamous scene from Harry Potter and the Goblet of Fire in which Dumbledore "yells" at Harry (In the book, Dumbledore "asked calmly.") Given that Tara admitted to having watched the movies more than read the books, this is likely where her portrayal of Dumbledore came from.

After the fourth chapter, it's clear that Tara quickly caught on that most readers were not happy with her for making Dumbledore swear and yell at students. However, as Dumblydore's line in Chapter 13 reveals ("I don’t give a darn what Voldemort does to Draco"), Tara only understood that readers were upset with her for making Dumbledore swear (hence the "darn") - she didn't understand that they were upset because she was somehow screwing up the basic concept that the canon Albus Dumbledore was calm and collected, a detail that even the second to My Immortal's 'Worst Harry Potter Fanfiction Ever' title, "Hogwarts School of Prayer and Miracles" was able to more or less nail down. An epic fail indeed from Tara Gilesbie.

More onto the fact, Dumbledore is never described flying a broomstick in canon (with the exception of the Half Blood Prince, although it is doubted Tara got that far with the series), being skilled enough to Apparate to anywhere he wishes.

Dumblydore is described as having both Alzheimer's (one of the very few words spelled correctly in later chapters) and "kancer". Dumbledore is not known to have either of these ailments. 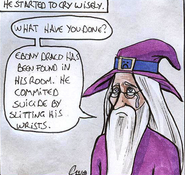 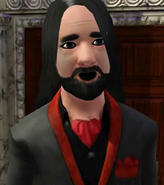