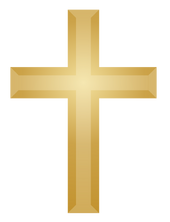 A C-R-O-S-S is apparently one of only 2 ways to kill a vampire (the other being a steak, although Navel's parents dyed in a car crash). This makes sense somewhat (as much as anything can make sense in My Immortal) in that all My Immortal vampires are Satanists (Stanists?) and are biased against Christians, for whom a cross is a symbol.

This also follows the long tradition of vampires being weakened/burned by crosses and other holy Christian symbols. In spite of this Egogy has been known to wear "cross belly fings", cross earrings, and other cross paraphernalia over the course of the story, and has also stolen a cross-shaped item from a teacher. She also occasionally has the aversion to saying "cross" as in "a cross between X and Y", Tara will sometimes substitute the word "pentagram" (Geddit, cuz she's goffic) in its place, such as this "gem" from Ch. 38:" My voice sounded lik a pentagram betwen Amy Lee and a gurl version of Gerard Woy".

However, as with the cross jewelry this is not a rule she takes too seriously. In Chapter 10, the same chapter where it is introduced that a cross is lethal to a vampire and where she refuses to even say "cross", she mentions her band Bloody Gothic Rose 666 sounds "like a cross between GC, Slipknot and MCR."

Retrieved from "https://myimmortal.fandom.com/wiki/C-R-O-S-S?oldid=12192"
Community content is available under CC-BY-SA unless otherwise noted.