"Im good at too many things! WHY CAN'T I JUST BE NORMAL? IT'S A FUCKING CURSE!"
―Ebony

Ebony Dark'ness Dementia Raven Way (aka Enoby) is the main character and Mary Sue of My Immortal. Arguably the worst female character in fanfiction history (or literature in general), she is a seventeen-year-old "goffik" vampire witch who attends Hogwarts School in England. She is the occasional girlfriend of Draco Malfoy and Vampire Potter, also one of the few characters in the story not "based on" a canon Harry Potter character.

Role in the Story

She was chosen by Proffesor Sinister to kill Voldemort by travelling back in time to the eighties and seducing his younger self, Tom Satan Bombodil, so that he wouldn't turn to evil. However, she accidentally brought Satan into the modern day with Morty McFli's blak tim machine, causing him to become Voldemort. At the end of that battle, she casts Abra Kedavra, and what happens next, we will never know. Also, she goes to concerts, changes clothes, and has "sex" with Draco a lot.

Ebony, when she in a relatively good mood, is loud and cheerful. She often shouts and screams, even in public places[1] or medical areas,[2] where such disruptive behavior would be frowned upon. When she met with Satan, she is shown to be excitable and bubbly, and she is usually described as happy when she goes to concerts.

Ebony is rather loud and aggressive towards everyone, including her teachers and close friends.[3] She is dismissive, even towards people who care about her.[4] She uses a lot of profanity, even towards authority, although she admits to forgetting that Proffesor Sinister is a teacher after she swears at her.[5] Ebony is rather bold, as she storms into a lesson to yell at Vampire Potter about her relationship issues without mentioning any fear of consequence. Despite her brash attitude, Ebony has been also shown to be somewhat cowardly at heart, as she will often beg for mercy when confronted by a more powerful villain.[6]

Ebony is rather promiscuous, as shown by the fact that she has been involved with both Vampire Potter and Satan while in a sexual relationship with Draco. She is also flirtatious, sometimes without even meaning to be, and she wears a variety of revealing clothes in her day-to-day life. However, she insists that she isn't a slut.[7]

Ebony is shown to have depression and self-harm issues. She often feels unhappy, even when something good happens, and is irritable and tearful. She frequently self-harms in her spare time and drinks her blood. Ebony has contemplated suicide on multiple occasions, even taking out a steak and coming close to sticking it in her heart.[8] She is often described as doing things in a 'depressed' or 'suicidal' way.

Ebony's overall attitude and behaviour towards people who aren't goffs is aggressive and downright antisocial to the point that one soon starts to suspect she is suffering from a severe mental instability. Her personality lapses from friendly and moody indicate she may possibly suffer from mood swings. She seems to also be suffering from some sort of respiratory ailment; possibly asthma, since she gasps, (or gosps or grasps) approximately once every three seconds or when a remotely (or not even) surprising event occurs.

Ebony is described as having long ebony black hair with purple streaks and red tips that reaches her mid-back, pale skin, and icy blue eyes "like limpid tears". (Although they change to crimson in Chapter 22, probably due to contacts that she slept with for some reason) She often wears inappropriate clothing: Usually involving fishnets, a corset, and combat boots. She also wears red and black makeup. She claims not to need foundation due to being pale, but it is soon forgotten and she is seen with it later.

In Chapter 1, Ebony immediately becomes infatuated with Draco Malfoy after he calls out her name. (In an AN, Tara claims they knew each other before, and he is acting different because he is so in love with her.) When her friend Willow asks her if she likes him, she replies "No I so fucking don't!", but says 'hi' to Draco flirtily when she next sees him. After they attend a Good Charlotte concert together in Hogsmeade, they have what one can only assume to be intercourse in the Forbidden Forest.

Random and unsettling sexual encounters between the two, all equally ignorant of basic biology, punctuate the story frequently, and their relationship hits the rocks almost every chapter. Seeing Draco having tastelessly described intercourse with Snap prompts her to slit her wrists with a steak to kill herself (although this is disputed in the reviews, some biologists claiming it is impossible to slit one's wrists with a slab of cow meat).

Ebony also has a flirtation with Vampire Potter, the ex-boyfriend of both Draco and Britney. Vampire and Ebony make out at a concert, screw each other in a classroom, french each other underneath the 'invisibility coke' and later, Vampire films a pornographic film of Draco and Ebony. He and Draco once fight over who gets to 'shit next to her' (whether this is an intentional misspell with the intent to gain lulz, a genuine typo or a strange fetish of Tara's has polarised several stances on the quote).

Later, when Professor Sinister sends Ebony back in time to the eighties, Ebony goes on a date with Satan Bombodil, the past form of Voldemort. They have sex in a "blak" movie theatre and then go to a Marilyn Manson concert to perform as 'XBlakXTearX', a support act. Her plan is to make him good by seducing him, but later drops this when she meets his ex-boyfriend Hedwig, a sexy gothic bi guy.

Ebony has several female friends in Slytherin house. These include B'loody Mary Smith, Willow, and Darkness Weasly. She is also friends with the half-Japanese, half-vampire Proffesor Sinister. Although Ebony is described as bisexual, she doesn't seem to have any sexual attraction at all to women in the story, although mentions Hogwarts being full of 'hot gurls' and describes Willow as having a 'nice body with big bobs and everyfing'. The only female Ebony is attracted to appears to be herself.

She also gets along with a lot of the male Slytherin students. These include Crabbe and Goyle, Diabolo Weasley, and Dracula. She isn't shown to flirt with them, despite her promiscuous nature.

She later forms a friendship with the gothic shopkeeper Tom Rid, who unlike canon is not related to Voldemort. He gives her free clothes because she looks hot in them, and offers to do makeup if she wants because he is really into fashion - his bisexuality being the reason for this. However, when he says he might see her at the concert, she calls him a sick perv because she's going with Draco. Later, he goes to the school and gives her some more clothes for her mission in the past, and she hugs him 'in a gothic way'.

Ebony has an antagonistic relationship with Britney, a Griffindoor "Prep." She gives her rude gestures many times, always describes her as a 'fucking prep', calls her clothes slutty (despite Ebony's own wardrobe consisting of attire she describes to be provocative), and near the end of the story uses the 'Crucious' curse to torture her. Britney, aside from somehow freeing Snap, Loopin and Hargrid from Azerbaijan, does nothing to Ebony apart from having a different way of life. Enoby also hates Snap and Loopin after they spy on her naked, calls them both preps, and happily tortures and humiliates them afterwards.

Hargrid's relationship with Enopby is inconsistent. He is first mentioned as a member of her band Bloody Gothic Rose 666 (alongside her, B'loody Mary, Diabolo, Draco and Vampire), and comes to her aid when she's being video taped by Snap, seeming to oppose them, and also proclaims his love for Ebony. Yet after this, he's called a pedo and is being sent away with them, and Ebony claims he had been mean to her before for being gothic, and calls him a poser prep. Later, he's seen trying to poison her blood mixed with beer with 'Amnesia Portion', and Ebony calls him a fucking poser. The unusual change in Hargrid throughout the story is justified by the lack of any cohesiveness between chapters anyway. Tara states she meant Hargrid to be Sedric, but does not go into detail when and where Hagrid was supposed to be Cedric. Just, don't think about it too much.

Snaketail, aka 'the fat guy who killed Cedric', also falls in love with Ebony and asks her to have sex with him. Unlike others infatuation, this comes after she shoots him to defend Draco's life. Her response is to drop some F-Bombs, stab him in the heart and let him run around bleeding to death screaming. He is, for some reason, labeled as a teenager so he will not look like a pedophile. This is, ultimately meaningless, as he is murdered in his only scene.

Ebony is shown to dislike Hogwarts Principal Dumblydore, despite the fact that he rescues her more than once. This relationship may be mutual, as Dumblydore repeatedly and cruelly rejects Enoby and her friends after they come to give him urgent news.

As for the villain of the story, Voldemort, she tends to be scared of him, continually begging him for mercy when he demands she kills Vampire. At the very end of the story, she seems to attack him with Avada Kedavra, but what happens afterwards, we will never know.

Ebony constantly says she is a vampire and that she can only be killed by a cross or a steak through the heart. Ebony also has a long soliloquy stating how she would never touch a cross. However, Ebony negates that claim in Chapter 6. She says, "I put on two pairs of skull earrings, and two crosses in my ears." She goes even further than that in Chapter 19 when she says, "I was wearing a blak leather low cut top with chains all over it, a blak leather mini, black high held boots and a cross belly fing."

Whether she misspelled "fing" as ring or thing, she was still wearing a cross, which by definition, should have killed her.

Ebony also claims that she hates the color pink, although this is apparently contradicted in Chapter 2 when she states that "My coffin was black ebony and inside it was hot pink velvet with black lace on the ends."

Most of her clothing is black and leather, and she has a penchant for corsets, or at least 'corset stuff'. Lace appears on a lot of her clothes as well. Her makeup usually consists of red/black eyeliner, eyeshadow and lipstick.

She loves My Chemical Romance, frequently gushing over how sexy Gerard Way is, and moshes to their songs often. Good Charlotte are another of her favorite bands, and she loves Evanescence too, judging by her comparing herself to Amy Lee repeatedly. She tends to like horror movies like The Ring, The Grudge, Saw, and Shark Attack 3, and considers Tim Burton movies to be particularly gothic (The Nightmare Before Christmas, Corpse Bride).

Ebony, like Tara, likes yaoi (guy on guy), and points out she loves seeing men do it - as long as they aren't fucking preps. Despite this, she tells Draco after finding out he was in love with Vampire that he 'probably has AIDs anyway!'.

TaEbony in the My Immortal comic 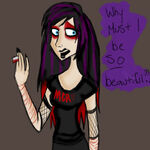 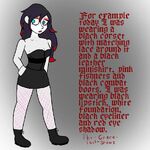 Ebony in the My Immortal series from 2010.
Add a photo to this gallery

Retrieved from "https://myimmortal.fandom.com/wiki/Ebony_Dark%27ness_Dementia_Raven_Way?oldid=12768"
Community content is available under CC-BY-SA unless otherwise noted.