My Immortal Wiki
Register
Don't have an account?
Sign In
Advertisement
in: Articles with warnings, Characters, Hogwarts Students,
and 5 more

Unknown, claims to be a Gothic Satanist, but also tries to poison Ebony

"I MAY BE A HOGWARTS STUDENT…. BUT I AM ALSO A SATANIST!"
―Hargrid

Hargrid is a fellow student of Ebony. Not much is known about him, as he does not make many appearances. Hargrid is supposedly based on Rubeus Hagrid of the original Harry Potter series, but this is not evident at all. Instead of being the gamekeeper, Hargrid is just a little Hogwarts student. He also confessed he is a Satanist. Along with Dumblydore, he is a poser. Despite being mentioned as a hogwarts student, he's called a "pedo 2" by Tara in an author's note ("AN: stop f,aing ok hargrid is a pedo 2 a lot of ppl in amerikan skoolz r lik dat I wunted 2 adres da ishu!").

Before Hargrid became enamored of Ebony, he had bullied her for being goffik. The reason for his sudden change of feelings is unknown.

He first appears in Chapter 10, where he is stated to be the drummer of Ebony's band Bloody Gothic Rose 666. During Snap and Loopin's plan to film Ebony, he runs outside on his broom and attempts to reveal something, only to be called a little Hogwarts student by an unknown person (possibly Snap or Loopin). He angrily tells everyone that he might be a Hogwarts student, but that he is also a Satanist. Then he started singing a gothic version of a 50 Cent song. Snap and Loopin seem to be very shocked at this revelation and ask him why he did this, after which Hargrid confesses he did this out of love for Ebony.

He later somehow gets hospitalized together with Ebony, Snap and Loopin. Ebony becomes hostile to him despite being a member of her band and helping to save her, calling him a "poser prep". Hargrid gives Ebony a bouquet of flowers that enrages her since they are pink. However, Hargrid casts a spell using MCR lyrics and butchered Latin to turn the pink roses into balls of black fire, which are supposed to reveal what happened to Draco. After Albert Dumblydore tells Ebony to "find urslf 1st" before being able to see what is in the flames, Hargrid starts shouting at Dumblydore. He calls him a mean old man and a liar, before storming back to his bed.

He later appears when Ebony is shopping for clothes at Tom Rid's store to wear at an MCR concert. He flies into the shop on a black broomstick and insists Ebony needs to come back to the castle now. His reasons for doing this are never revealed and he flies away angrily after he gets badmouthed by Ebony.

During the takeover of Hogwarts by the Mystery of Magic, Hargrid sneaks around potions class in hopes of poisoning Ebony with Amnesia potion (a love potion). Draco and Vampire beat him up sexily for this and he is chained to the floor. Hargrid was sent to Abkhazian; the last time he is mentioned in the story is when Britney breaks him free from prison.

Curiously enough, Hargrid's appearance is never described beyond him being called a "little Hogwarts student".

It is unclear as to which Hogwarts School clique Hargrid belongs to. Although he is listed as a member of Ebony's band and a self-proclaimed Satanist, and therefore presumably goff, Ebony later derides him as a "poser prep" and claims he has been mean to her for being goffik in the past.

Hargrid is very obsessed with Ebony, to the point he converted to Satanism just because he loves her. But this love is nonreciprocal, since Ebony treats him with complete disgust. This doesn't stop him from trying to get the girl, because he later tries to poison Ebony with Amnesia portion.

Differences from the original[]

Like mentioned above, Hargrid turned into a Hogwarts student. This is really strange, since the original Hagrid is 69 years old during the events of the last book. However, Tara refers to him as a "pedo" in her chapter notes, indicating that Hargrid may be both a Hogwarts student and an adult. But him being a student is still a major deviation from the original Hagrid, as Hagrid was a teacher from Harry's third year onwards.

Hargrid also seems to be more nimble compared to Hagrid, as runs outside on brooms, ignoring the fact the original states he is too heavy for a broom (probably why he must run in on it, not fly). Hargrid is also seen sneaking around, further suggesting a smaller posture. The fact that he is easily beaten up by Harry "Vampire" Potter and Draco Malfoy also seems to suggest he lacks the huge physical strength the original is blessed with.

Another notable omission is that Hargrid never shows a love for dangerous magical creatures; something the original was infamous for. Hagrid, for example, raised, or tried to raise, sentient elephant-sized man-eating spiders, a dragon and a three-headed dog, all of which are considered very dangerous creatures by the Ministry of Magic. Unless one counts Ebony as a dangerous creature, Hargrid does not share this trait in the slightest.

Hargrid is also a hopeless romantic compared to Hagrid. While the latter did develop unrequited romantic feelings towards Madame Maxime at one point, both of them decided they would work better as friends, seeing how different they are. Hargrid, however, is constantly obsessed with Ebony, despite there being no romantic chemistry between them whatsoever. He even goes as far as to attempt to poison her with love potion. The real Hagrid would probably find the idea revolting.

He also acts hostile towards Albert Dumblydore, calling him a liar and a mean old man on one occasion. The original Hagrid is fiercely loyal to Dumbledore, to the point of becoming angry when someone insults the headmaster. Insulting Dumbledore is one of the easiest ways to make Hagrid lose his temper, to the point of trying to curse or even physically strangle the insulter. With Hargrid, on the other hand, almost everything Dumblydore says to him will make him lose his temper.

His relation to Harry "Vampire" Potter is negligible to say the least. In the original books, Hagrid is more or less the first true friend Harry Potter made in his life, Hagrid being the one telling him about his Wizarding heritage. Vampire, however, barely has any meaningful interaction with Hargrid. The only notable bit of interaction is him beating Hargrid up after trying to feed Ebony a love potion.

In terms of personality, Hargrid seems to be much more gruff and angry compared to Hagrid. He yells almost all of his lines, most of which contain at least one swear word or insult. Hagrid, meanwhile, is a much more kindhearted individual. He does have a boisterous side, but his main demeanor is warm and tender.

Another major difference is that Hagrid does not appear to be a satanist, as religion plays no part in the original Harry Potter novels.

"AN: ...hargrid is a pedo 2 a lot of ppl in amerikan skoolz... plus hargrid isn’t really in luv wif ebony dat was sedric ok!"
―Tara Gilesbie's author's note in Chapter 12

In the author's note preceding Chapter 12, Tara says it is not Hargrid who loves Ebony, but Sedric (probably Cedric Diggory), despite the fact Cedric never played a part in My Immortal. Cedric is later mentioned, however, as having been killed by Snaketail. This author's note suggests that Tara might have confused Hagrid and Cedric, and so when she mentions Hargrid, she means Cedric. How she managed to do this is completely baffling to say the least. She doesn't even change Hargrid to Cedric after revealing her mistake.

It is never revealed how much of Hargrid is supposed to Sedric or Hargrid himself. This would explain how he can be a band member, hated by Ebory, a little student and a pedo. It may be assumed that the band and little Hogwarts student is Cedric Hargrid while poser prep pedo Hairgrid is the adult. Even this doesnt make sense because Cedric isn't little. It is best not to think about it too much. 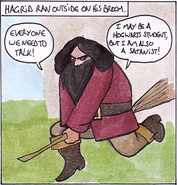 Hargrid announcing his status as both a Hogwarts student and a Satanist, as depicted in the My Immortal: The Comic. 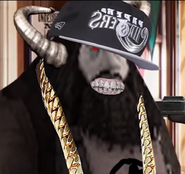 Hargrid as depicted in the film adaptation by the Internet Historian