Mr. Norris and Filch the cat

Mr Norris and Filch the Cat

Other Names for Mr. Norris

Other Names for Filch

Filth
Mr. Norris is the 'Janitor' of Hogwarts School. He hates the students with a passion, and wants to do everything to make them feel rotten. He is also accompanied by his cat (?) Filch.

Mr Norris first appears when Ebony and Vampire are chasing down Draco, who is angsting about something. He loudly asks if there is anyone nearby whilst waving around a flashlight. Filch makes his way under Vampire's Invincibility Coke, which is apparently visible, and meows. Inexplicibly, Vampire frenches Ebony just as Mr Norris pulls off the cloak and they run away.

Mr Norris is mentioned as looking happy when Lucian and Sirius are rescued.

Dumblydore and Mr Norris both interrupt Hedwig and Satan's love-making session in the past. He isn't mentioned when Dumbydore is interrogating the protagonists, though.

Lastly, Mr Norris arrives with Lupin after Britney frees the latter from 'Azerbaijan'. He expresses his hatred for Hogwarts students, claiming that his job would be great without them, then runs away when Ebony casts a spell on Lupin.

Difference from the Original[]

Hogwarts has no janitor, but a caretaker. The caretaker is called Argus Filch and the cat Mrs. Norris. It seems reviewers pointed out this mistake to Tara, as one of her author's notes says:

Despite this both names are still erroneously switched around for the entirety of the fanfic.

Also, both characters appear to have the ability to see "invincibility cokes", albeit not what is beneath them. This differs from canon, where invisibility cloaks are indetectable by sight.

Apart from the name change and Mr Norris' incorrect job, these characters might be the least changed compared to their original counterparts in the entire fanfic. This is based on the fact both Mr Norris and Argus Filch hate students with a passion and both of them own a cat they use in their everlasting war against the student body. 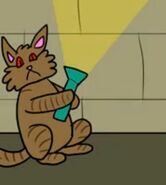 Mr Norris from the dramatic reading by Zeniawulfe

Filch the cat by Zeniawulfe

Mr Norris, from the dramatic reading by PinkElephantFreak

Filch the cat by PinkElephantFreak
Community content is available under CC-BY-SA unless otherwise noted.
Advertisement